Recently I had the wonderful opportunity to indulge in a Hollywood ghost hunting tour. Inspired by my friend, Faith Dincolo – Ghost Hunter, I had always wanted to go on one of these expeditions and was happy I finally did. I searched on yelp and trip advisor for the best tours and came across a delightful lady from the City of Dark Angels Tours. I knew immediately that this would push me past my “freaky twilight zone” limits and push me to become the chicken-shit ghost hunter.

In our mile long quest we learned all about the old theatres and their prior owners and current inhabitants.  The one which intrigued me the most was Pantages which had been owned by Howard Huges.  Some weird stuff going on in that place. 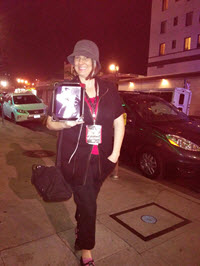 Our ghostess was an effervescent lady who was thoroughly versed in the legends and lore of the Hollywood strip and dammit if I can’t remember her name. [terrible with names] Oh Yes!  Now I remember … her name is Kim Hamsher! Anyway, here is a picture of her standing in front of famously haunted Knickerbocker Hotel.  Here is where we tried out the K2-EMF detectors or ghost boxes. The EMF (Electro magnetic field) measures strength of electro-magnetic field.  It quickly scrolls through AM channels to tune into the vibrations where ghosts can communicate.  We were gathered in sets of 5 and hooked up to one of these boxes with our ear buds.

Upon asking the ghosts residing in the hotspots to communicate, I asked them to tell me my name. Three out of the five of us heard it.  [I have verified witness too] When I asked the ghosts to repeat my name and they did on cue, I was hooked! 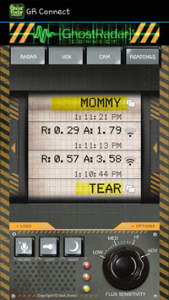 So I immediately downloaded the fun “entertainment purposes only” Ghost Radar app and we experienced all kinds of fun “coincidences.” Our ghostess strongly encouraged us not to use this app at home in case we had ghosties in the house.  I figured if there were any ghosties in my house, I would want to communicate with them.

The two men I had called father in my life, my grandmother, and our baby daughter.  I would love to talk to any of them once again. So, not obeying the ghostess I played with the app about a week later. [I had to think about the warning and the consequences for awhile].  Finally, I decided—what the hell. Needless to say, I was a bit shocked to see the second communication on the ghost radar was “mommy.” Was the spirit of our daughter trying to communicate? Or was this simply a coincidence? *got the chills again*

So after that experience, I started watching more shows on satellite for ghost hunters, which I always thought was incredibly gutsy and crazy and started really listening to what they were saying.  It wasn’t until a few days later when we were out geocaching, a family tradition, and I had opened up my phone to take a picture.  It was then I saw a message on the ghost radar app that said “string.” My daughter held up the geocache find and it had strings hanging off of it! Check out the pics below. 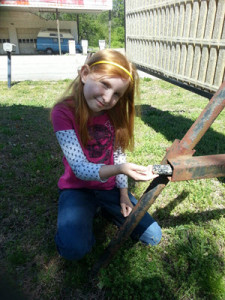 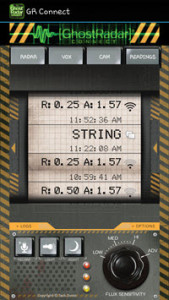 So about this time, I shared with my hubby what I had been doing and he thinks I’m full of bologna. But I’m his wife and he’s going to entertain my latest kick, right? So now I have him watching the crazy TV shows of people locking themselves up in haunted asylums and abandoned farmhouses to commune with the spirits of beyond to try and catch a glimpse of a voice or a connection to the dead.

Both of us have concluded that we never want to spend the night in a 72-hour lockdown crazy place. That’s where my chicken-shit ghost hunter comes out in me.  I’m fascinated and scared all at the same time.  It’s an amazing whirlwind of emotions and makes me want to learn more about the types of real equipment used for ghost hunting such as EVP (Electronic Voice Phenomenon) recorders and spirit boxes.

Who knows what I might encounter over the next few years, but I’m willing to embrace for now that someone said my name twice on Hollywood blvd and I hadn’t uttered a word almost the entire the night.

How can I explain how the ghost radar whispered “strings” to me and we found the geocache with strings attached to it? I’m anxious to explore this world of the unknown and maybe try not to scare the living hell out of me.  I mean, if I’m going to write about paranormal fiction, then I might as well write about what I know and love. 🙂

Interested in joining me?  Let’s take a ride on the wild side and I’ll share with you some of my misadventures of the chicken-shit ghost hunter. Deal?

Have you ever had a supernatural experience?  Share with me something that has happened to you.  I would LOVE to hear your story!

One comment on “Confessions from a Chicken-Shit Geocaching Ghost Hunter”