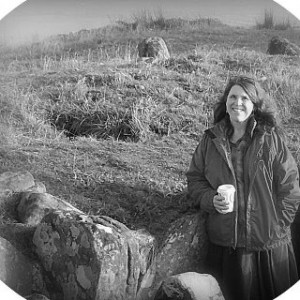 Please welcome today Amy K Marshall to the website.   Former archaeologist and curator (among many other things), current Director of The Craig Public Library on Prince of Wales Island in Alaska, I am also the author of THE FISHING WIDOW (Alaskan Gothic Press 2013). I am an Associate Member of HWA and a member of their Library Committee.

Amy brings to the table a tale of terror for her entrant piece in the 2013 Wicked Women Writer Challenge titled, Paternoster.  You can read along with Amy’s story  while listening to her podcast at Horror Addicts.net.  Amy’s apocalyptic disaster was loss of power.  Her location was an elevator and her helpful item was a Swiss Army knife.  Her untimely disability was a sprained, swollen ankle.

Wow, that’s a good first question… I think I first found out about it on the Facebook Group for Horror Open Calls. It came out around the same time as an anthology called The UnForgotten… I never did hear about that other anthology… But, this one sounded really interesting, but I’d never done a podcast, so I had to think about whether or not I could actually do this.  I’m also more of an old school (William Hope Hodgson, Lovecraft) horror writer, so I wasn’t sure what I write would translate to a podcast.

While I’d never done a podcast, I enjoy listening to them. I’d done a book trailer and done some Foley work for our theater company (The Prince of Wales Players), so I started playing around on Sound Dogs and listening to atmospheric music and sound effects–squishy sounds, sawing sounds … stuff like that. I thought I’d go ahead and bite, and when the challenge came my way, I thought, oh … unholy hell. I can’t do this…

Really. I thought <I>Oh, unholy hell, I can’t do this.</I> An elevator with a Swiss Army Knife, a sprained ankle? Really? I mean, I didn’t know what I was going to do, and it wasn’t helping that my husband would laugh and say, “You’re a writer! Just suspend that disbelief!” Yeah, well, there’s only so much disbelief you can suspend…so, in true I-do-this-all-the-time style, I just … fretted…

You used sound effects and music in your production extremely well. What was your favorite part? Hunting down the sounds to complement your words? Engaging sounds to escalate emotion? Have you recorded podcasts before? If so, where can we hear more from you?

I was bumming around Sound Dogs looking for music, actually. Wait, no, I was bumming around Sound Dogs looking for an authentic 1908-ish arroogah car horn and cartoonish crash because our theater company was putting on the musical The Wind in the Willows. It was during one of those searches that I started finding other sounds because their search strings are … inaccurate. But, inaccurate in all the best, fun ways! It was there that I found the sawing sound, and I had that groaning-creaking sound from when I made The Fishing Widow’s book trailer (that’s part of the elevator dropping).

I found some elevator sounds, but then went looking for the elevator. I don’t know how I found You Tube videos of Paternoster s in Copenhagen, but I did. Thank God, I did… My favorite part was mixing it all together. Actually, my favorite part was when the microphone I bought started to work on Windows Vista (‘cause it hated Windows 7). Yeah, and this is my first one. I think I want to do more… I know I want to do more.  I’ve got a Carnacki The Ghost Finder homage called THE GHOSTS OF KUSKULANA. That would be a fun one…

What was the hardest part about your challenge?

Figuring out the tech and then trying to figure out how I was going to write the story.

Mixing the story (holed up in my bedroom and trying to do it quietly because my mother-in-law was visiting…and concerned….)

Did you learn something new about yourself while doing this challenge?

I can write creepy and gory. I don’t think I write particularly creepy stuff (although my readers tell me I do), but I listened to this and thought … ew… And I learned that I truly love doing podcasts like this! THANK YOU!

Tell us more about YOU, your past stories, books, other artwork, your current project, and what’s on deck in 2014?

Oh, well, there’s The Fishing Widow, which is set in Alaska during the Sitka herring sac roe fishery in 2010–between then in 1835. It’s a full-on Gothic Horror with creatures I’m pretty sure no one’s used commercially–a Kushtacah (a shape-shifting land otter soul sucker) and a Gonaq’Adêt (pronounced “gunnakedit”), which is a “good luck sea monster.”

I also retold (and significantly darkened with the undead) the Russian folk tale Salt, and just published a poetry collection: A Poem A Day Won’t Kill You … But Mine Might Leave You Wounded. I had a poem picked up by the International Remaking Moby Project this summer–THAT was so exciting, because I adored Moby Dick when I read it for senior English in high school. There’s this, and several other stories in anthologies, too.

Currently, I’m writing a YA that started as a lark for the Sledgehammer Writing Contest. It’s called Søren’s Girl, and it’s a coming of age and coming to terms type of story between a teenaged girl and her father who happens to be a disgraced musher. I’m having fun with that one, and, while it’s not classic horror, rest assured that there are horrific elements in it!

Oooo….. That’s something I’d really have to think about. It might be fun to twist a Grimm or other tale, or maybe do a horror travel piece.

Thanks for having me!

Where Can I Find Out More About Amy?