Happy Mother’s Day to everyone who is a mom whether it is for a kidlee, a furbaby, plant, or a feathery friend. Even if it slithers, crawls, or hops!  If you love it, then claim your special day 🙂 <3

My mother is fulfilling her bucket list and we are trying to help her check off as many items as she can.  One of them was owning a Great Pyrenees. The other was owning a Mimosa tree.  Guess which one she got first? 😛

So after days of searching, we finally found the perfect li’l fella.  ya know, right at the moment when you finally give up and say, well that’s not gonna happen.  If t was meant to be, then the clouds part and so does your wallet. And the next thing you know you’re asking.  What does he eat and how much?

So this happened for Mother’s Day 2016 … His name is Drakkar, but I have been calling him Tarzan because he’s gonna get that big! 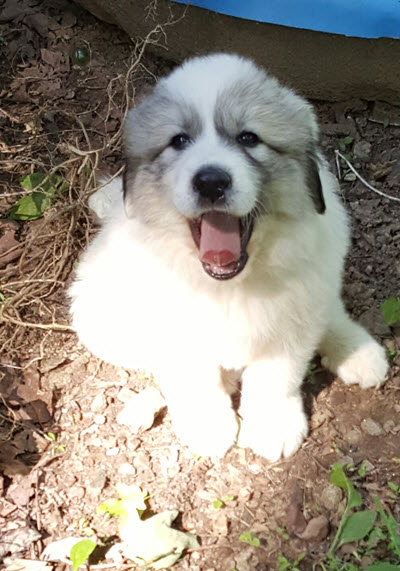 You’re Asking – so … what’s with the WerePyr comment in the title?  Well sure enough, as soon as I posted this cuddling beast on Facebook, peeps immediately called him out and said, “He’s the next Were-creature in the Killion Slade novels!” 🙂  SOooooo …. lots of sooooing in this post today … I thought about it, and thought about it … scratched my head and decided I might just be able to pull that off.  I love a challenge, don’t you?

Anyway – hat’s off to Miss Billie Rinke for the idea. Let’s see how much trouble Tarzan … err … I mean Drakkar and I can get into. Thanks for joining the journey and I hope you have an awesome day! *grins*

Wanna Stay Connected?  Plop yer info below and I’ll be sure to touch base from time to time about the awesomeness of life! <3