Take a ride of the wild side with a soul-sucking incubus, gun-toting gangbangers, redneck werewolves, and blood withdrawals in Leigh M Lane’s latest release – Jane the Hippie Vampire ~ Love Beads! 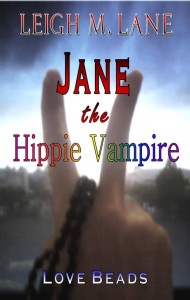 That Which Doesn’t Kill You

Jane’s a pretty laid back gal considering all she’s gone through in the last fifty years. She’s dodged death more times than she can count. Just to name a few of her close calls, she’s survived a soul-sucking incubus, gun-toting gangbangers, redneck werewolves, blood withdrawals, possession by ghosts suffering from body envy, zombies with a particular taste for vampire flesh, and getting dosed at a club. That’s not counting all of the would-be vampire hunters who’ve trailed her across the country and back.

Of course, each of these encounters has its own novella, and I’m sorry to say only one of them is currently available. I can say, though, that I have more than one episode finished and plan to release a new one every month or two. Jane has so many adventures to share, and with those adventures comes the kinds of horror, heartache, and redemption you’ll find in her first episode, Love Beads. How long her saga lasts will be up to you, the readers, and some might even change from where they currently stand on the drawing board depending upon the feedback you share in reviews and letters. Who knows—maybe Jane will make a pit stop through your town before all is said and done.

Hopefully, she’ll survive whatever evils lurk in the shadows of your streets….
About Love Beads:

Jane has had one hell of a time ever since she bumped into the wrong guy during the Summer of Love, but she’s taken it all in stride. Wandering from town to town, she seeks out the needy and the broken in hopes of breaking the curse that’s left her bloodthirsty and forever seventeen.

In Love Beads, Jane crosses paths with a middle-aged man who’s encountered her kind before—but he seems happy just to have the company. Of course, appearances can be deceiving, and his secret might just prove to be the end of her.

Love Beads is the first novella in the Jane the Hippie Vampire series.

THE LATE AFTERNOON SUN negated any relief the light breeze might have offered, and the mottled shadow cast by the massive oak tree stretching overhead wasn’t much more helpful. Jane slumped on a park bench, dozing on and off, a wide-brimmed hat and boxy sunglasses obscuring her face. Her backpack sat beside her, one arm threaded through the shoulder straps to deter potential thieves, and she crossed her legs at the ankles. She wore a ragged pair of blue jeans and a Doobie Brothers tee shirt so old the applique had cracked and faded beyond recognition. Her bare feet were calloused and in desperate need of a good scrub.

She’d find a decent place to crash soon. There was at least one Good Samaritan in every town, and they were usually easy enough to spot. Patience was the key. That—and a practical sense of when the local heat had decided she’d overstayed her welcome. Hanging around anywhere long enough to be recognized was a bad thing. Recognition led to suspicion, which led to a slippery slope that began with harassment and ended with the gas chamber. She’d seen it happen before, and it was a pretty hellish fate for those on the difficult side of killing. There was no respectable place left in this world for vampires, not at least that she’d found, and it was not at all hospitable to a burned-out flower child who couldn’t seem to pull her head out of the sixties.

A handful of adolescents infiltrated the park, putting an end to the peaceful quiet she’d been fortunate enough to have enjoyed for the last couple of hours. The disruption had been inevitable, and she took it in stride despite her exhaustion. She sat upright, watched the kids play flag football for a few minutes, and then donned her backpack and made her way to the sidewalk. It was a sunny day, not at all comfortable, and the heat instilled an aching desire to curl up on the side of the street and slip quietly into a coma. Such extended exposure would undoubtedly do just that—before it reduced her hide to burnt leather—so she moved as quickly as her sluggish legs would take her to the shady overhangs of the buildings across the street.

The town she’d found herself in was small and quaint, with boutiques and small shops packed within a tiny radius. The smell of fried food permeated from a nearby greasy spoon. She considered going in, but she only had a few bucks and some change on her. Moreover, a diner was far from ideal for mingling with the locals. Mingling was the objective; luxuries like food—“people food”—were secondary.

Not like food wasn’t a necessity in its own right, just like water and doobage. A girl could only go so long without her doobage. Life was mundane enough as it was. A little variety, beyond blood type, was all that stood between her and insanity. 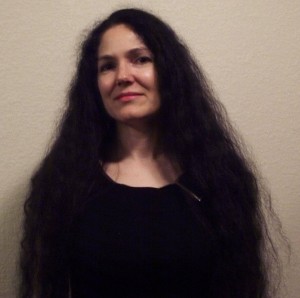 Leigh M. Lane has been writing for over twenty years. She has ten published novels and twelve published short stories divided among different genre-specific pseudonyms. She is married to editor Thomas B. Lane, Jr. and currently resides in the hot and dusty outskirts of Sin City. Her traditional Gothic horror novel, Finding Poe, was a finalist in the 2013 EPIC Awards in horror.

Her other novels include World-Mart—a tribute to Orwell, Serling, and Vonnegut—and the dark allegorical tale, Myths of Gods. Visit Leigh’s Amazon’s Author Page to learn so much more!

For more information about Leigh M. Lane and her writing, visit her website at http://www.cerebralwriter.com.

Love Beads is available on Kindle for .99: http://www.amazon.com/Jane-Hippie-Vampire-Love-Beads-ebook/dp/B00L0J8ROQ