Today I have the wonderful pleasure of interviewing Paula D. Ashe about her recent Novella – Mater Nihil featured in Four Ghosts. Paula is the ghost on the lower right hand side of the cover image above.  Great Cover!  How Fun 🙂  Without further ado, let’s get into our questions!

You have many wonderful books on Amazon. What inspired you to start down the horror trail?

Thanks so much, Killion! Hmm…I think horror had me before I even realized that’s what I wanted to write. Since childhood, I have always held an interest in things that many would consider dark, disturbing, morbid, or just gruesome. The first story I remember writing was about a little boy whose beloved dog drowns in a pond. I then remember writing a story about the apocalypse. Both stories had to be around the time I was five, maybe six years old. While I experiment in other genres, everything I write has a dark edge to it. That’s just how I roll.

You have written several books on Indiana, where these stories inspired by real events?

I’ve published a number of stories set in Indiana, mainly because this is the place I know. I am originally from Ohio and moved here a few years ago. There is something creepy about the Midwest. Not in a stereotypical backwoods way, just that I have always found both states eerie in terms of their historical connection to the genocide and exploitation of the People of the First Nations and racial violence against Black Americans. There’s a sense of desolation and loneliness that I feel nowhere else but here. My work is always loosely inspired by some crime or incident that occurs in real life, but nothing specific to Indiana.

Can you tell us about your challenges in getting your first book published?

I can’t believe I’m saying this, but having my novella published as part of a collection was shockingly easy. James Ward Kirk — the editor and publisher of Four Ghosts — told me about the project months in advance and asked if I would be interested in contributing something. I said yes (I think my exact words were, “F–k yeah!”) and the rest just fell into place. The most challenging part for me really was the process off writing. Mater Nihil is the first long-form story I’ve completed. It was an arduous, torturous, and at times brutal process, but with James’ encouragement, I was able to make it through.

How did you come up with the story for your latest Novella in 4 Ghosts? The title immediately had me Googling to learn more, but the prologue to your story, Mater Nihil, had me hooked!

Thanks! I’m so glad to hear that! The prologue is one of the most vicious openings to a tale I’ve ever written, so I’m thrilled to know it had a lasting impact. As sort of hinted at in the previous answer, I struggled for quite some time with the plot for this novella.The initial incarnation is entirely unrecognizable in terms of its connection to MN. I’m honestly not sure what sparked it, other than this idea that there are malevolent forces in the universe that appear and reappear throughout human history. Call them gods, call them demons, whatever, human wickedness is something we just can’t escape.

It’s an idea I’m kind off obsessed with. I knew I wanted my protagonist to be practitioner of magick, but I didn’t realize that Samira was an empath until I got much deeper into the story. As I explored the narrative of Samira’s life, I thought also about infanticide and how someone, a parent, could kill their own child. I’m always what happens after a trauma or tragedy. What if as a child, your mother tried to kill you? How would that shape your worldview? How would it shape your ideas on motherhood and parenting? I did a great deal of research on various gods and goddesses of ancient Mesopotamian belief systems (Akkadian, Sumerian, Chaldean, Assyrian), looking for some connection between divine beings and child murder. I stumbled across Lamashtu, an ancient goddess who tormented mothers and their children. That was pretty interesting, but I then discovered that Lamashtu is thought to be the etymological and spiritual foremother of Lillith, and being a feminist dark fantasist, I of course adore the mythologies of Lillith. So, I wanted to create a loose genealogy that linked Lamashtu to Lillith, Lillith to Mater Nihil, and Mater Nihil to Jacaranda Holland, Samira’s mother.

Do you have a favorite character who likes to talk to you? Is there one character or story stuck in your head, begging to be revisited?

For over five years I’ve been working on the first book in an epic dark fantasy series. The story is about a young woman called Silore (sih-LOR-ray) who lives in a theocracy where humans are classified according to their ability to ‘Wield’ or utilize their will to change the concrete world around them. Wielders are closest to the God of this world, so those who can do so are thought to possess greater grace and spiritual purity than others. The Church controls everything in society and there is a fairly complicated hierarchy in which various abilities are ranked and controlled by agents of the Church. The young woman is descended from a dynasty of Wielders who — in the last few centuries — have found their power and influence waning. There is much pressure on her to use her extraordinary gifts to regain her family’s honor and authority. The only problem is, she is the living apocalypse, the eschaton embodied. It is her fate to bring ruin to the world.

All my characters (at least in my longer works) scream to have their stories told. However, Silore always shouts the loudest.

Do you have any books written outside of the horror genre? 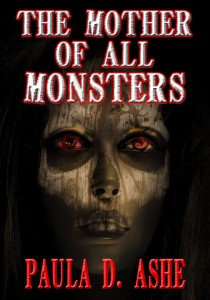 Yes, I have stories published that fall into the realm of science fiction (The Ladies Room), dark fantasy (The Skin of Men), and some (yet to be published) erotica. I’m comfortable in any genre that allows for some level of darkness and unease.

Some authors have said it is therapeutic to kill off “difficult people” by creating a character and finding creative ways to help them find their demise. What is the most creative killing you have written?

Wow, that’s a great question. I’m not even sure! My characters tend to die in ways that aren’t so much creative (at least to me) just gross and gruesome. Some have their throats ripped out, some get set aflame, others are tortured to death.

Tell us more about your recent novella release. What’s next on deck for 2014?

Well on November 9th I will be participating in a local Author’s Fair where I will be selling copies of Four Ghosts and giving out some free stuff, some of which will be things I find in my garage. More information about the Author’s Fair can be found on my website (www.pauladashe.net).

For 2014 I am planning to release a collection of previously published and new short stories, along with another novella, tentatively titled “Transubstantiation Blues”. Originally, it came to me as an idea for a short story, but after working on it I’ve realized that this very dark, very chilling police procedural/neo-noir/erotic horror tale about pain and lust and divinity is going to require a larger canvas. I initially planned to self-publish this collection, but I will see if any small/independent presses might be interested first. I am also in the process of negotiating with an established local publisher to potentially edit an upcoming collection of queer black erotica.

Bonus Questions: What are you truly most afraid of? How do you deal with that fear?

The two biggest things I am afraid of are death and madness. I am afraid of my loved ones dying. I have lost too many this past year. I think I deal with the fear by living, by concentrating on that. I also just avoid thinking about it when I can. I am afraid of going mad, of disconnecting from reality entirely. I have struggled with a severe mood disorder and an anxiety disorder for most of my life. These conditions are treatable, but not curable. I deal with that fear by practicing good self-care when I can and indulging some of my uglier vices when I can’t. I also have an incredible spouse who protects me from my fears better than I ever could.

Thank you Paula for sharing some amazing insight into your world.  I truly look forward to reading more goodies from you in the future.  <greedily rubs hands together>

You can find more Paula on Facebook at Pauladashe, on Twitter @pauladashe, and her Amazon author page at http://www.amazon.com/Paula-D.-Ashe/e/B0071DTH7Q