Legend!  Today on the Killion Slade blog we have the hilarious Eric Nash!  Having the opportunity to feature another Brit on my blog … needless to say, I’m chuffed 😀 One day when I have the opportunity, I will cross the pond and hopefully visit all of the wonderful friends I’ve met online. Eric would definitely be at the top of my list.

I asked Eric about his latest short story titled, Pigeon, featured in Wrapped in Black, the latest anthology addition to Sekhmet Press’ arsenal of terrific tales.  In this contemporary, social media driven horrific story – I wasn’t sure who I wanted to root for to win the outcome.  Without revealing any spoilers, I feel both main characters got what they deserved! 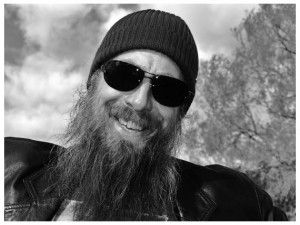 Ha! I have no idea, Killion.  We binned our television back in ’04, so I’m ignorant not just of who is in or out, but who any of the today’s actors are.  Y’know, I think I’d go for new talent.  Yes, I could name actors from a decade ago. but using people that no-one has heard of keeps the visual grounded in reality.  In my writing, I get a kick from blending the everyday with the fantastic so I would wish to do the same in a movie.   [I love the idea of not having a TV.  We hardly watch ours and we never turn on the news!]

Maddie has potential and she is fun to work with, so possibly.  I have been musing on the idea of a whole bunch of my main characters making cameo appearances in a novel or two.  I expect it would be entertaining to write and I hope the same to read, but suspect that there might  be  a danger of overload. [Maddie is truly a force to be reckoned with.  Not sure I would want to cross her path!]

What should Sekhmet Press produce next? Maybe a Wrapped in Snow – Horrific Arctic Adventures!  What say you – what content topic would also spark your pen?

It’s got to be Wrapped in Fur, hasn’t it?  Werewolves have always scared me. Is it because I watched The Hound of the Baskervilles (1939) when I was little or the fact that they are the beast within us all? Probably both. Of course, we all know that they are out there and they don’t need full moons anymore – just a friday night at the local pub and a kebab to finish.  Now look what you’ve done Killion, my  brain is already on the  whir, clunk, grind. [Muah hah hah ha!]

What is the “must have” or “must do” before you sit down to write?  Me – I have to brush my teeth.

Like it.  Does the dentist ask you how many times a day you write?  I make a cup of tea.  I usually put the kettle on several times when I am writing.  I find moving away from my laptop dislodges ideas – either that or I’m procrastinating. [I have to have tea as well! Depending on the scene I’m writing will determine the flavour and strength of the brew. My favourite is called Market Spice – a delicious blend of spicy orange and cinnamon.]

By writing.  The process of creating really gives me a buzz.  Kicking a ball around with my kids chills me out.  Or if I have time, taking a long ride on my motorcycle.

Romantic notion. I could chop wood, my wife could bake badger pie and the kids could run naked in the forest with the little people.  Nah, living in civilisation, while at times is infuriating, provides me with some scary material.  It’s carnival season over here in England and patrolling the parades are young lads with earpieces and hi-viz jackets.  One  is pleading with me to shove him inside a story.  I’m not sure I should do it to him though: once he’s there he’s never coming out. 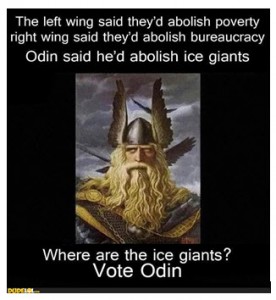 I write dark speculative fiction, so probably patchouli oil.  Aagh, just kidding. When I was a teenager most of the girls drenched themselves in that stuff and the smell still haunts me today.  Poison by default, then.  Although, it’s  probably  important to note that I don’t wish to harm people – just scare and disturb and give them nightmares. [So yeah … that’s not harmful ;)]

Two reasons: 1. It captures the farce that political campaigning can be.  2. I’m a great fan of Mythology and Legends. 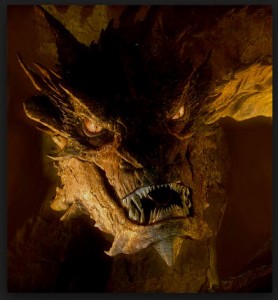 Back when I was knee-high, my primary school teacher read The Hobbit to us. As soon as Smaug the dragon was introduced  I was entranced.  Such intelligent and  graceful creatures.  Can you imagine how amazing it would be to fly and breate fire? [We are truly kindred spirits! Maybe the next “Wrapped in…” series should be Wrapped in Scales!]

There are a couple of slick ones in my novel which I am in the process of editing and editing and editing and … it seems that Tolkien has affected me more  than just giving me a love of dragons.  I like to approach killing scenes from different angles.  I prefer the build-up to the event rather than the murder itself.  After all, there is nothing scary about the physical act of killing someone.  I believe that the fear is in the suspense; the horror is in the lack of morality.

No, absolutely not, Killion.  Never.  By all the gods, I promise that I have never done that. [Snicker * Snort]

These lie with my children and what the future will bring for them.  All I can do is help them become strong, independent and confident people.  Oh, I don’t like spiders.  When I see one  I whisper the arachnid’s location to my kids who will then pluck the beast from its lair  and feed it to their flesh-eating plants called Venus and Diana.

Where can we learn more about Eric?

Eric Nash writes dark speculative fiction. As yet he has not won, or been nominated for, any awards for his literary works. However, he is working on this and will be sure to let you know when he does. He lives in the south-west of England, possibly with his wife and children but he can’t be sure as demons have lashed him to his writing desk and bolted the door.

One comment on “Pigeon by Eric Nash – Author Interview”