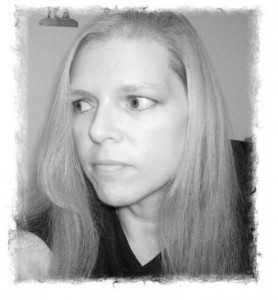 Today I had the wonderful opportunity to interview the lovely and talented Rose Blackthorn for her latest horror short story titled, Beautiful, Broken Things for the new Wrapped in Black anthology for Sekhmet Press.

I have always been in love with the Morrigan tales and Rose’s story brings empathy and love into the fearful crossroads of life’s choices.  My favorite line was, ” The taste was bitter, like his many regrets.”

I’ve never given much thought to casting for these characters, so it’s hard for me to say. The ones that I’ve chosen below are because they physically match the characters.

I think that Trey’s story is fully encompassed, and would probably not expand on him. However, there is lots of room to continue with Nousha and Ciara. I have become quite fond of the city Apex, which has been divided into high side and low side; and I’ve already written another short that takes place in this setting. I can definitely see setting more stories in Apex, as it’s a rich background for a myriad of character types.

What should Sekhmet Press produce next? Maybe a Wrapped in Gauze – for ancient mummy stories?  What say you – what content topic would also spark your pen?

Hmm… Wrapped in Grey for stories about the undead, perhaps?

Depending on what I’m working on, sometimes I have to have music. I match music to what I’m writing – soundtracks are good, celtic music works well for fantasy, a lot of times tracks of thunderstorms or ocean waves or other natural sounds.

Specifically when I’m working on short fiction, I’ll search my files or the internet for a photo or painting that puts me in the right mood or mindset for the story, and I’ll set that as the wallpaper on my laptop. Then, every time I open the screen, it puts me right into that atmosphere.

Reading, watching movies or series that I’m into. Spending time with my fur-kids is always a good reset. When I can, take a drive out into the wild and get some pictures. Too often, I’ll take a break and end up on social media (TIME SUCK!) but sometimes that’s a good way to freshen my perspective.

How off the grid do you mean by off the grid? Would I like to live out in the middle of nowhere where I don’t have to deal with traffic, etc? Already there 😉 I wouldn’t mind being off the grid as far as no longer dependent on the power and gas conglomerates. But I like electric lights and hot water, and research via the net is very convenient. So, probably not. 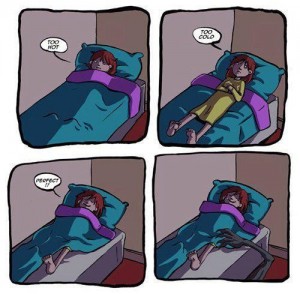 My immediate response is poison, first because I’m contrary, and second because that’s the name of my favorite perfume. I find it interesting though that many of the poisons in nature, if used in small enough doses can actually be beneficial. Wintergreen plants produce salicylic acid which is toxic at higher concentrations; but at a lower dose and in modified form, it’s the active ingredient in aspirin.

Toxins from snakes, snails and fish can be dangerous if not deadly, yet they can be used for the treatment of pain. A compound found in Deathstalker Scorpion venom can help in the treatment of brain cancer. Tarantula venom can be used to treat muscular dystrophy, and cobra venom for arthritis. Would I be beneficial or harmful? Well, I guess that just depends on the situation 🙂

At this point, my self-gratification comes from being able to finish what I’m working on, to get my thoughts and ideas down onto the page in a manner that makes sense and is interesting/entertaining.

What is your favorite meme? Scary sleeping monster under the bed! (featured above) 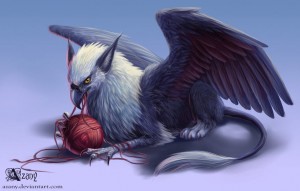 Oh, there are so many. Dragons are great, and I’ve been through my unicorn stage. But the last little while my favorite has been the griffin – probably because I have a griffin character in the fantasy novel I’ve been working on.

The best killing scene I’ve ever written is bittersweet, and unprovable. I was working on an urban fantasy while at work, writing on my work computer. I wrote the scene, it was incredible – it flowed well, I felt like I was truly inspired, and everything just clicked. And then the computer glitched and froze.

I tried everything, and ended up having to reboot… and lost the entire scene, several pages long. One of the few times I actually felt sick to my stomach because it was gone, and I was never able to get it back. To this day, I’ve never been able to duplicate the original feel and flow of that scene. I’m a big believer in the auto-save function for my Word program, and I back-up regularly.

I’ve never killed a boss or co-worker. I have killed my ex more than once. I’m just vindictive that way.

I fear losing those I love. I have a problem with heights. I have social anxiety. I have a phobia of bees, wasps, hornets. The apiphobia is probably the most irrational and detrimental. I’ve almost wrecked while driving because of a bee in the car. Mostly I try to stay out of situations where there is a high concentration of bees, where I might get stung.

Where can we learn more about Rose?

Rose Blackthorn lives in the high mountain desert of Eastern Utah with her boyfriend and two dogs, Boo and Shadow. She spends her time writing, reading, being crafty, and photographing the surrounding wilderness. An only child, she was lucky to have a mother who loved books, and has been surrounded by them her entire life. Thus instead of squabbling with siblings, she learned to be friends with her imagination and the voices in her head are still very much present.

She is a member of the HWA and has been published online and in print with Necon E-Books, Stupefying Stories, Buzzy Mag, Interstellar Fiction, SpeckLit, Jamais Vu and the anthologies The Ghost IS the Machine, A Quick Bite of Flesh, Fear the Abyss, Enter at Your Own Risk: The End is the Beginning, FEAR: Of the Dark, Equilibrium Overturned, and Wrapped in Black among others.